Year in Review: Looking Back at MOBA's Bright Inaugural Year

2016 - a year full of ... well ... anything and everything you could possibly think of, from happiness to heartbreak. Peyton Manning took home a Super Bowl ring in his final season. Román Torres scored the game-winning penalty kick as Seattle Sounders FC took home its first MLS Cup title. The Chicago Cubs took home their first World Series title in over 100 years. We also lost a number of big names in Prince, Craig Sager, Muhammad Ali, David Bowie, Arnold Palmer, and others. However, in this up and down year, soccer in the state of Georgia took a huge step forward on the back of the MOBA Soccer Academy.

Coming into 2016, word was spreading that the PDL was coming to Peachtree City in the form of Peachtree City MOBA, but little did we know the effect that would have on the community. Preparations began, and the talent flooded to the area as head coach Jordan Davis and owner Volker Harms looked to build a team to compete. Slowly but surely, all the pieces came together, and the 25 man roster took to the training ground to prep for their inaugural season. Little is expected during a team's first season out on the pitch as they just look to build connection and unity for the future, but MOBA wanted to compete immediately, and on May 14th, the team would face its first test in Clinton, Mississippi. 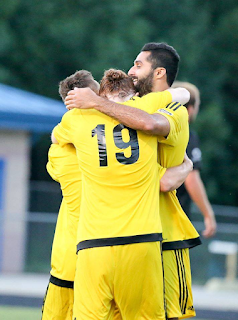 There were no favors made for Peachtree City as they would play their first six games on the road, a tough demand for any team, but a challenge they were willing to take. In a hard fought, tightly contested 90 minutes, MOBA fell to Mississippi Brilla FC in the season opener, 2-1. That did not stop MOBA, however, as they went out to Johnson City, Tennessee just three days later and grabbed a 2-1 win against fellow expansion team Tri-Cities Otters for MOBA's first ever victory. The schedule would take it's toll the next week, as MOBA lost three times in five days, and fell to 1-4 on the season heading into Statesboro. In the teams first ever matchup with in-state rival Tormenta FC, MOBA stole one late as Iain Smith scored in the 67th minute and the defense held its own to secure a 1-0 victory as the MOBA took for the home field for the first time.

Hopes were high as Peachtree City played their first home match, but were soon shattered as Mamadee Nyepon had his way with MOBA, scoring two goals in Carolina Dynamo's 2-0 win. MOBA, having faced adversity before, came out after a two week break with a 2-1 victory over Tri-Cities, completing the season sweep in one of the most dramatic games of the season, as Omar Jarun scored in the 85th minute, and Jessey Hein scored in the 94th. MOBA sputtered again during the next three games in five days stretch, falling in all three, but secured two draws in the following two matchups with Mississippi Brilla and Tormenta FC to wrap up the home season. In MOBA's final game in Greensboro, South Carolina, the season came to a bitter end as Peachtree City fell 6-1 to Carolina Dynamo.

A season full of ups and downs, MOBA finished 3-2-9, 6th in the South Atlantic Division. At the 2016 PDL Winter Summit, Peachtree City MOBA took home the Golden Scarf for Best Static Ad. Golden Scarves, a new addition to the Winter Summit, reward PDL Franchises for excelling in various aspects of the game. Despite the adversity, MOBA looks to build off the experience, and with tryouts coming up at the beginning of the new year, build an even stronger roster that can fight for a division title and a bid into the U.S. Open Cup.

Despite the setbacks in construction due to weather, "the show must go on," and go on it did. Priorities were made clear, and the playing fields were opened in time for the final few months of the year. The county dove at the opportunity that had opened, and a number of local clubs and organizations put the pitch to good use, and very quickly it became evident that MSA was going to be a large part of the community for the years to come. The Academy itself is slowly coming  together, and once it is complete, and PTC MOBA is ready to move in for the 2017 season, it will truly be a sight to behold off Highway 74.